This year’s exhibition at Stockholm Furniture Fair 2020 was created by graphic designer Carl Johan Hane. The exhibition tells the 75-year history of Lammhults in large black and white images posted on a bright red wall. It stands in contrast to the present, with current furniture in striking colors.

“The story we’re presenting is less meticulous and more rhapsodic. The images serve as eye-catchers and we’re using the narrative of our history to bring the image of Lammhults to life,” explains Carl Johan Hane.
And the exhibition is not to be viewed as an expression of nostalgia, according to Peter Jiseborn.
“We’re proud of our history, but from my perspective, the next 75 years are more important than the last. To me, this is the beginning of something new and that’s what I believe our bright red wall signifies. We’re looking forward to new collaborations with the next generation of designers and we continue to develop sustainable, circular products that take the environment into consideration with regard to materials and design.”

Within the framework of our spirit, Carl Johan Hane has also been tasked with revitalizing our graphic profile. “HC Ericsson’s logo in Futura is synonymous with Lammhults. Everyone in the industry knows this logo; they can see it from the corner of their eye and still think ‘Lammhults.’ So you can afford to play with it a little,” says Carl Johan Hane. 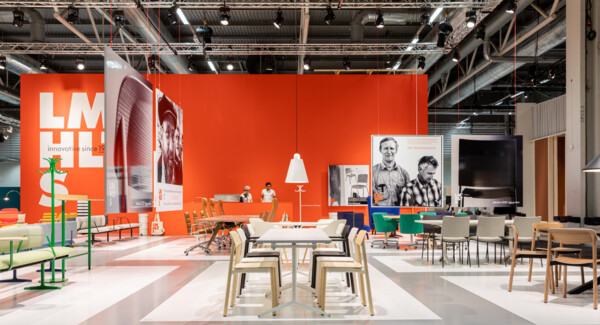 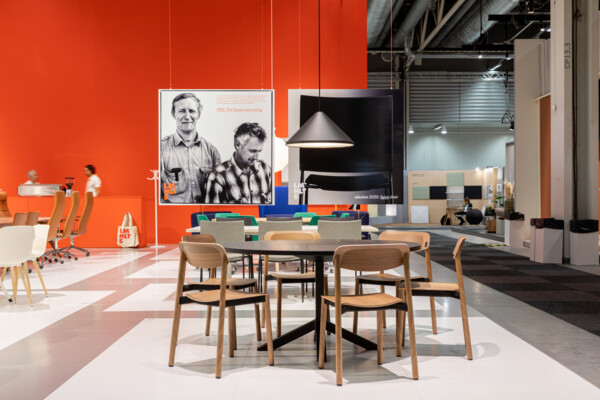 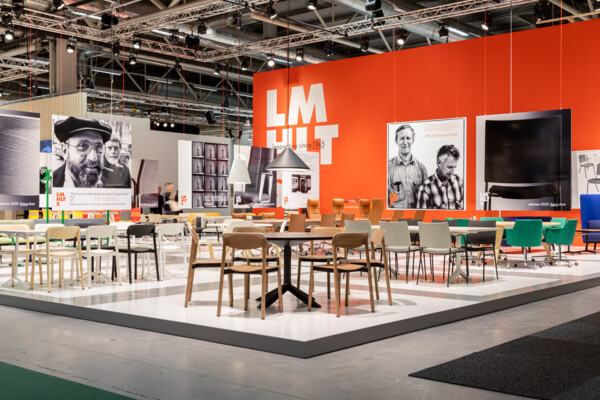 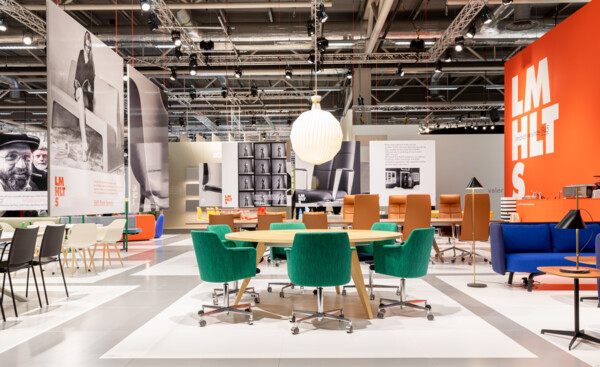 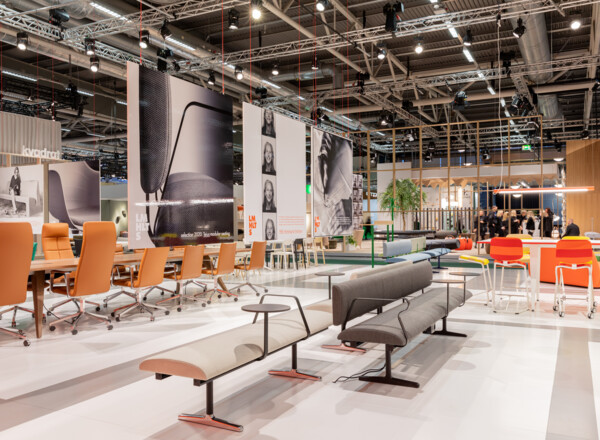 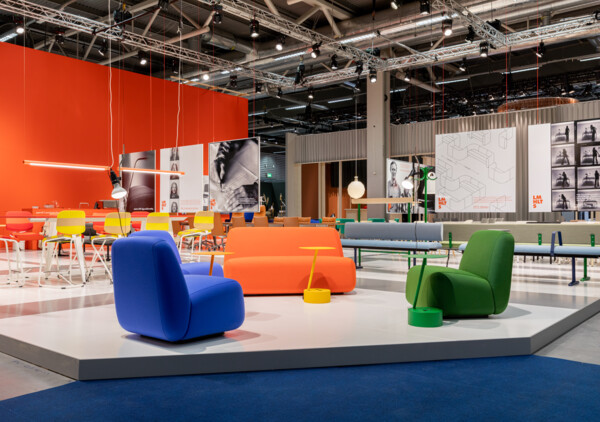 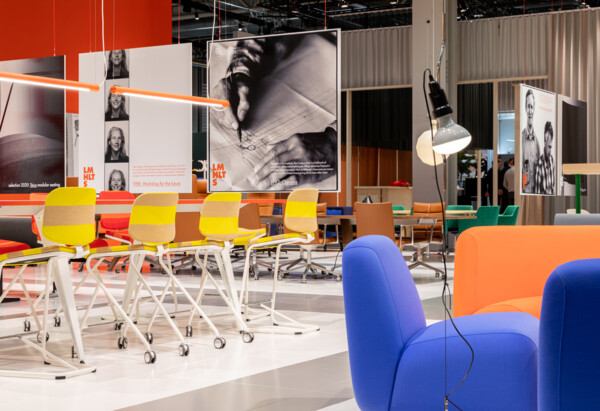 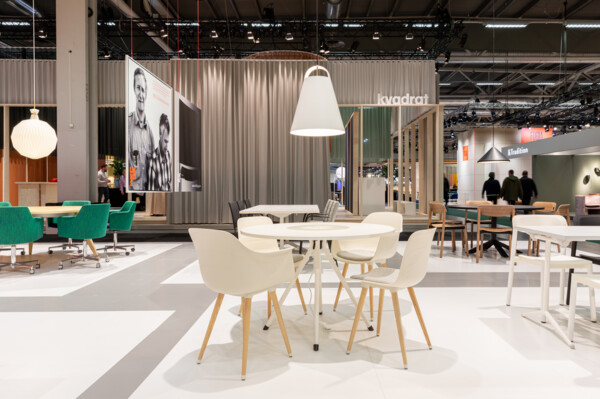 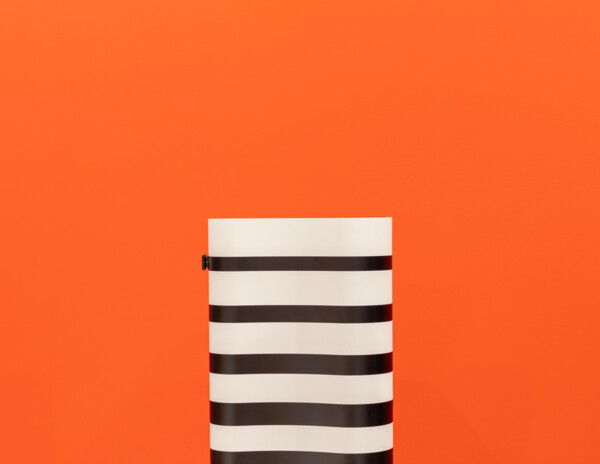 New arrivals at the fair
In conjunction with the 75-year anniversary, Lammhults and Love Arbén have produced a cupboard based on the distinctive, highly coveted Ono cupboard from 1992. The new anniversary edition is called L75 and it has been produced in 75 numbered editions. It will be possible to reserve one of these cupboards at the fair.

Teius is a new design that is particularly fun to introduce, because it is the beginning of a new collaboration and the result of X-WORKS 2.0. The competition, which was held by Lammhults and several design schools, allowed students to compete for one year of access to Lammhults’ product development stream and production.
One of the five selected designers was Andrés Nilson and we have worked with him to further develop his competition submission. The result is Teius – a circular, modular furniture design in the form of a bench or sofa that can be endlessly varied through connecting tables, armrests, high tables and electrical solutions. This innovative furniture design is well-suited to public settings such as airports, lobbies and waiting rooms.

Spira by Danish Johannes Foersom and Peter Hiort-Lorenzen is now being launched in a version with a seat and back made in black cast polyurethane, a material which lends resilience to the back for even more comfort. Spira’s seat and back have narrow grooves, creating air channels between the chair and user – and infusing the chair with added character. Another highly successful chair series by Johannes Foersom and Peter Hiort-Lorenzen is Archal, which was expanded in 2018 with the larger, more generous Archal XL model. To further enhance comfort and create a softer impression, Archal XL is now available with leather armrests.

Penne by German Julia Läufer and Markus Keichel is the first chair in the world made with a laminated wooden tube frame. Penne has now been updated with a construction that reinforces its durability while staying true to its circular intentions. The backrest is attached with zinc plates, a beautiful detail that echoes the color of the rim of the seat.